The photo issue for Snowboard Canada just came out and is packed with some great photos and articles.  Feet and I worked together on a story in the issue, and I just put together a little slide show of some of the images that didn’t get used. I just wanted to take a minute and thank all the people that made it happen. The SBC crew for taking a chance and trying something a little different as well as offsetting the carbon cost for all our gas guzzling snowmobiles and trucks. Jay Greenway for the music.  Ryan Proctor for the lift tickets at Whistler Blackcomb, and last but certainly not least all of the riders for their efforts and skills. Without them none of it would be possible. If you have two minutes check it out and let me know what you think. 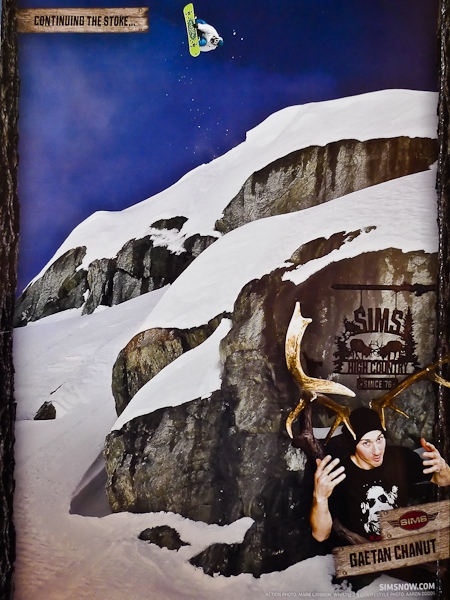 One of my favourite images of Gaetan was recently used in a new Sims ad. One of the things that makes this photo so special is Gaetan is riding an original Noah Salasnek model including the low backs from the early 90’s. Back at that time I was probably still rocking my Craig Kelly and the whole crew was jealous when our buddy Domi showed up with that deck. Twin tip, skate inspired graphics, it was one of the first boards to bridge the gap between skateboarding and snowboarding and was much different then anything we had seen at that time.

The day we shot this I remember Gaetan pulling out that deck and all my memories of riding golf courses and Mount Chili as a kid came flooding back. However, we were never pulling corked sevens like him! They also used one of my images in his profile on their website, check it out he is holding down seniority over there next to Tom.